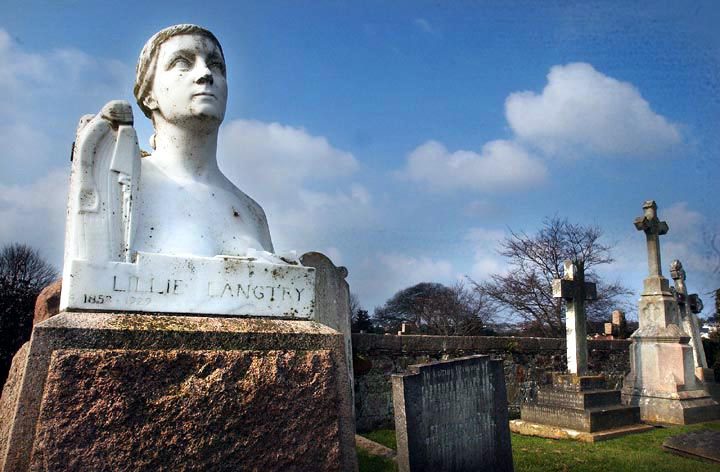 Lillie Langtry was born Emilie Le Breton at St. Saviour’s rectory- her father was the Dean of Jersey- on the island of Jersey.

Mark Twain eulogised over her beauty and intelligence. George Bernard Shaw complained that “She has no right to be intelligent, daring and independent as well as lovely,” Oscar Wilde wrote Lady Windermere’s Fan for her and a future king of England was one of her many rich and royal lovers.
Her pure white skin earned her the nickname of ‘The Jersey Lily’ and a contract with Pears Company to advertise their soap.

In 1874, Lillie met Edward Langtry, who although not very wealthy, did have a beautiful yacht. Lillie saw her escape from the island of her birth which had become too parochial for such an attractive and intelligent woman. They were soon married and moved to his home in Southampton. However, her new husband’s interests were drinking and fishing and when Lillie developed typhoid fever her besotted doctor convinced Edward that Lillie would recover much faster if they moved to London. In 1876 London was the capital of the world and as today a magnet for the super rich of Europe. To please his wife, Edward sold his beloved yacht to finance their new lifestyle.

In the spring of 1877, Edward and Lillie Langtry were invited to a society party by an old family friend from Jersey, the 7th Viscount Ranalegh. Still in mourning, following the recent death of her favourite brother, Lillie wore only a plain black gown- which was to become her trademark- with her red-gold hair gathered in a simple knot at the nape of her neck. Amid all the colourful costumes of the London society ladies, Lillie Langtry, as Oscar Wilde wrote later, had risen “like Venus from the Jersey foam”. One of the most renowned portrait painters of the day, a Jerseyman Sir John Millais, painted her and when the portrait, “A Jersey Lily”, was first exhibited at The Royal Academy, Lillie Langtry was already so famous that the picture had to be roped off to protect it from the huge crowds that flocked to view.

THE ACTRESS AND THE PRINCE

‘The Marlborough Set’ with its leader, the future King of England Albert Edward the Prince of Wales, was at the summit of London high society and it was inevitable that Lillie would be drawn into this circle. The Prince was a well-known philanderer and very soon after their first meeting Lillie Langtry became a besosted Prince Albert’s’ official mistress.

The Prince bought a love nest for the couple near Bournemouth, far removed from the London reporters that followed their every move. Invited to all social events as everywhere that Lillie went, the Prince was sure to go, the ‘Langtry Phenomenon’ was moving full steam ahead and Lillie couldn’t be happier. Then one night Lillie, usually a teetotaler, drank too much champagne and stuffed a large piece of ice down the Princes’ back in full view of the entire party. Lillie refused to apologize and their relationship came to a resounding halt, making Lillie a social outcast. Her fall from favour was as rapid as her rise to fame. Lillie had been given credit by every merchant she frequented as the advertisement “By Appointment to Lily Langtry’ would set the tills ringing. But after falling from the favour of the Prince, the vultures descended demanding their money. Close to bankruptcy and with no source of income her friend, the leading actress of the day Sarah Bernhardt, suggested she capitalize on her fifteen minutes of fame and become an actress. First appearing in light comedies her success was immediate.

Whilst playing to a theatre in Edinburgh, a New Yorker by the name of Henry E. Abbey was struck by her astonishing beauty and offered her a season in America. New York was rapidly catching up with London in the social scene and when, in 1882, Lillie arrived in America traffic came to a standstill and The New York Stock Exchange was closed. On the eve of her debut at New York’s Park Theatre the theatre burnt to the ground leaving only a charred sign bearing the name “Lillie Langtry”. Thereafter, Lillie’s fame was assured and she was a huge hit across America including a town in Texas named Langtry by yet another admirer, Judge Roy Bean. In the 1882-1883 season she grossed almost $150,000, an unheard of amount of money at the time. Lillie Langtry was one of the most famous women in the world.

In 1881, Lillie had given birth to her only child, Jeanne Marie, who rumour had it was fathered by Prince Albert’s nephew, Prince Louis of Battenberg. The real father was never revealed to the public or her family and Jeanne Marie was raised in Jersey by Lillie’s mother and a governess. She was raised as Lillie’s niece and was only told the real story on the eve of her own wedding day. A newspaperman in San Francisco uncovered the story and Edward Langtry, who hadn’t known about Jeanne, finally fell apart and was committed to an asylum. Now in her mid-forties and tired of the constant press intrusion, Lillie retired from the stage. Her successful stage career and recently acquired and profitable hobby as a racehorse owner meant that she was a multi-millionaire. She married a ‘toy-boy’, Hugo de Bathe at St. Saviour’s Church in Jersey in 1899 and after a brief return to the London stage and charity concerts on both sides of the Atlantic during the First World War she retired to Monaco. Though now in her fifties, she managed to break the bank at Monte Carlo, write a best selling novel and spend the last year of the war back in England helping grow vegetables for the war effort. In 1928, at the age of seventy five, Lillie caught bronchitis and though she recovered the following year she died in Monaco where she had spent the last decade of her life.

Lillie Langtry he beauty of her age, who had entranced and captivated men and women around the world for so long was buried in the church yard at St Saviour in her birthplace of Jersey.