Jersey Zoo was opened in 1959 by Gerald Durrell, a British conservationist and author. The trust operates 50 projects in 18 countries around the world, focusing on islands including those in the Pacific and the Caribbean. It helps to save endangered species such as the black lion tamarin and the Madagascar side-necked turtle. Animals at Jersey zoo are part of a breeding programme that aims to release them back into the wild.

Some of our favourite animals are: 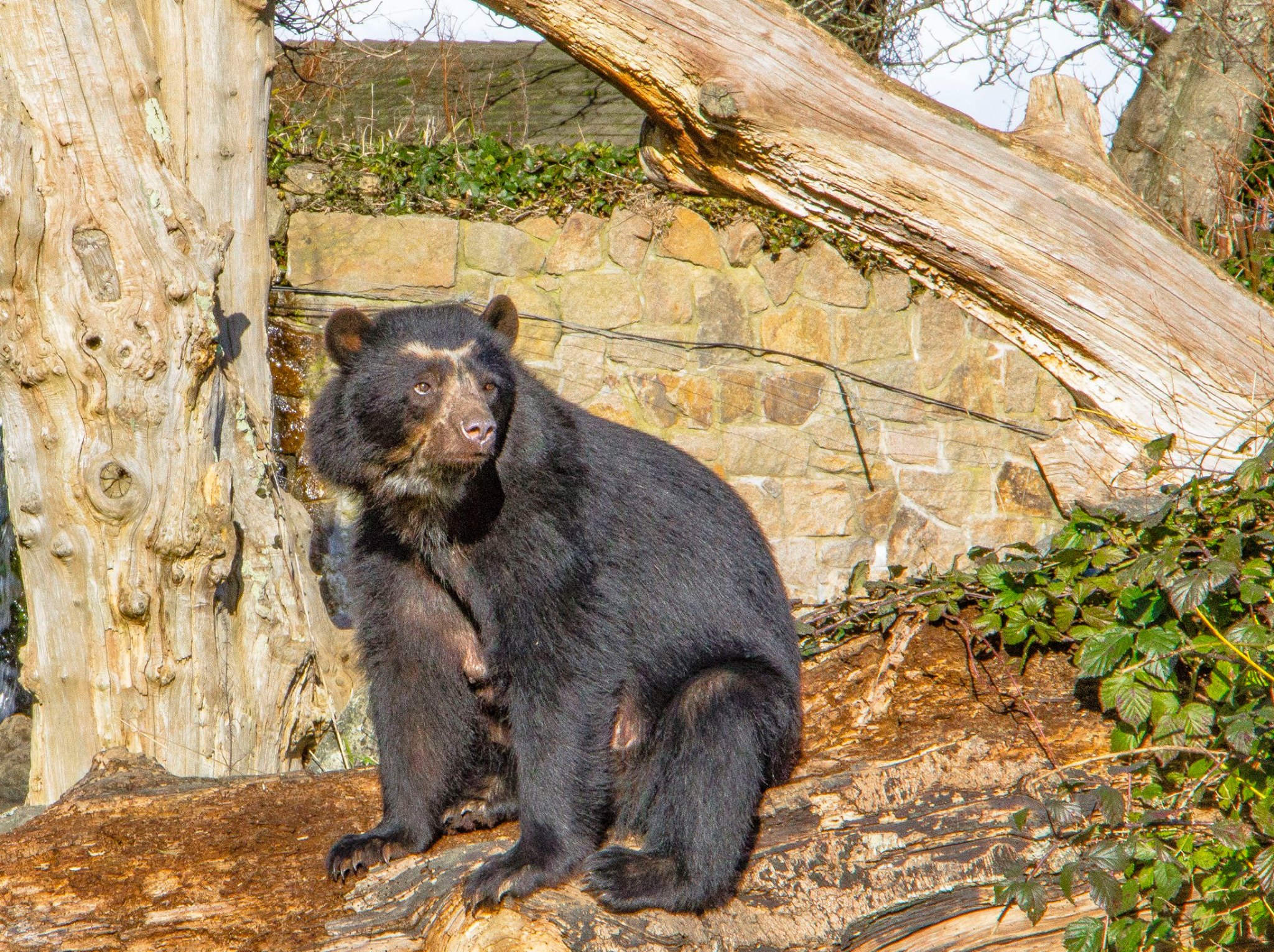 The Andean bears AKA  the spectacled bear, as it looks like it is wearing glasses, live predominantly  in the Andean mountains from western Venezuela south to Bolivia. It is the only bear native to South America. It’s a clever animal that builds platforms and nests in trees for eating and sleeping.

Fun fact– The most famous fictional bear, Paddington Bear, is a spectacled bear. 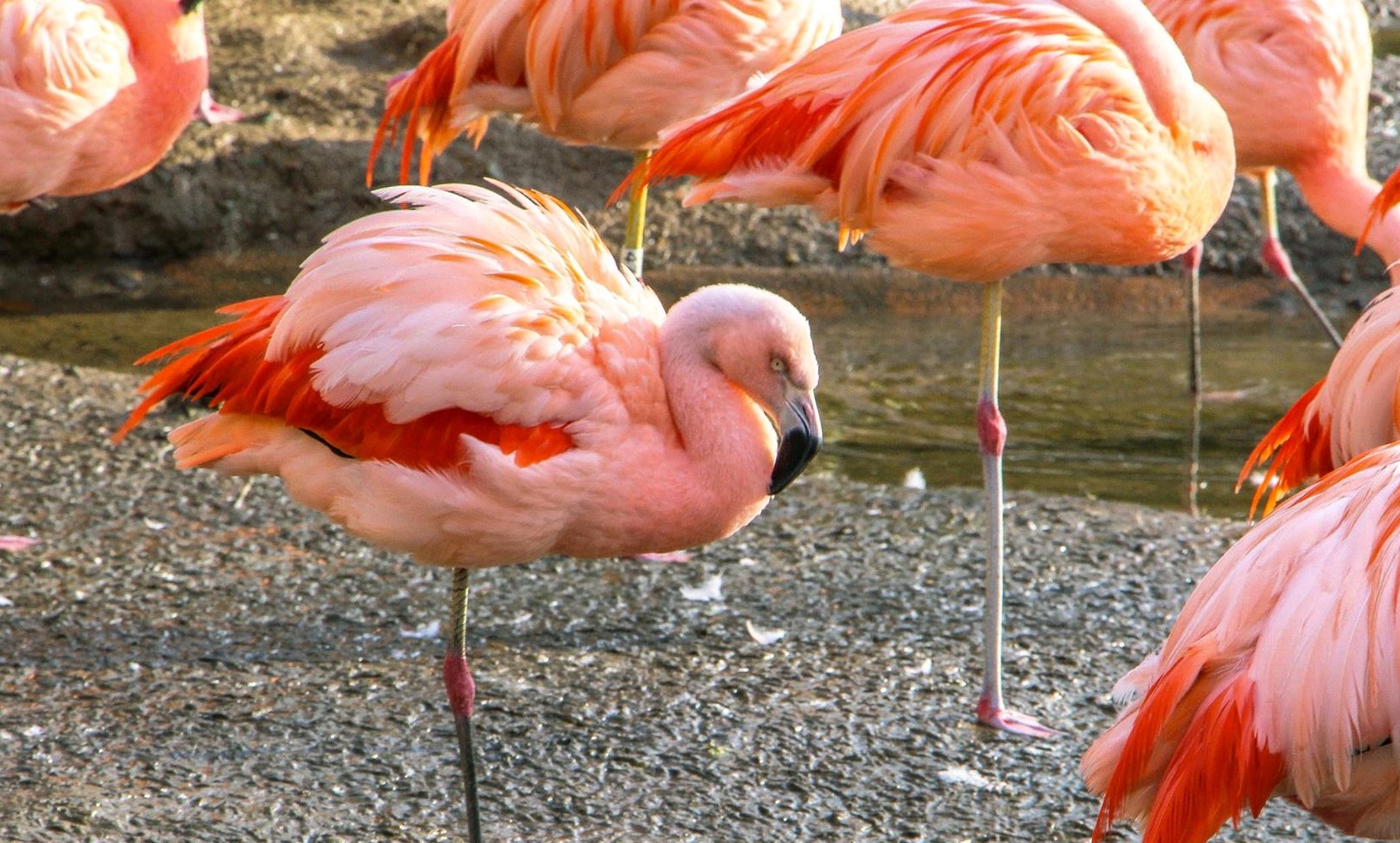 With their bright pink plumage Chilean flamingos are a popular photo opportunity at Jersey Zoo, In the wild they are found from the highlands of central Peru and Bolivia and south to Tierra del Fuego, generally in mountain lakes, These areas are vulnerable to habitat loss and water pollution.

Fun fact– Flamingos are an ancient group of birds. Their fossil records dates back about 10 million years ago. During Roman times flamingo tongues were considered a delicacy by the upper classes.

Jersey Zoo has kept western lowland gorillas since 1959 – the year it opened. This species is under a severe threat in the wild but as Durrell has seen 15 births over the years including the latest arrival, Amari seen above,

Fun fact– The most famous gorilla resident of Jersey Zoo was Jambo, the silverback Western Lowland Gorilla who made headlines around the world in 1986, when he ‘protected’ a young boy who had fallen into the gorilla enclosure 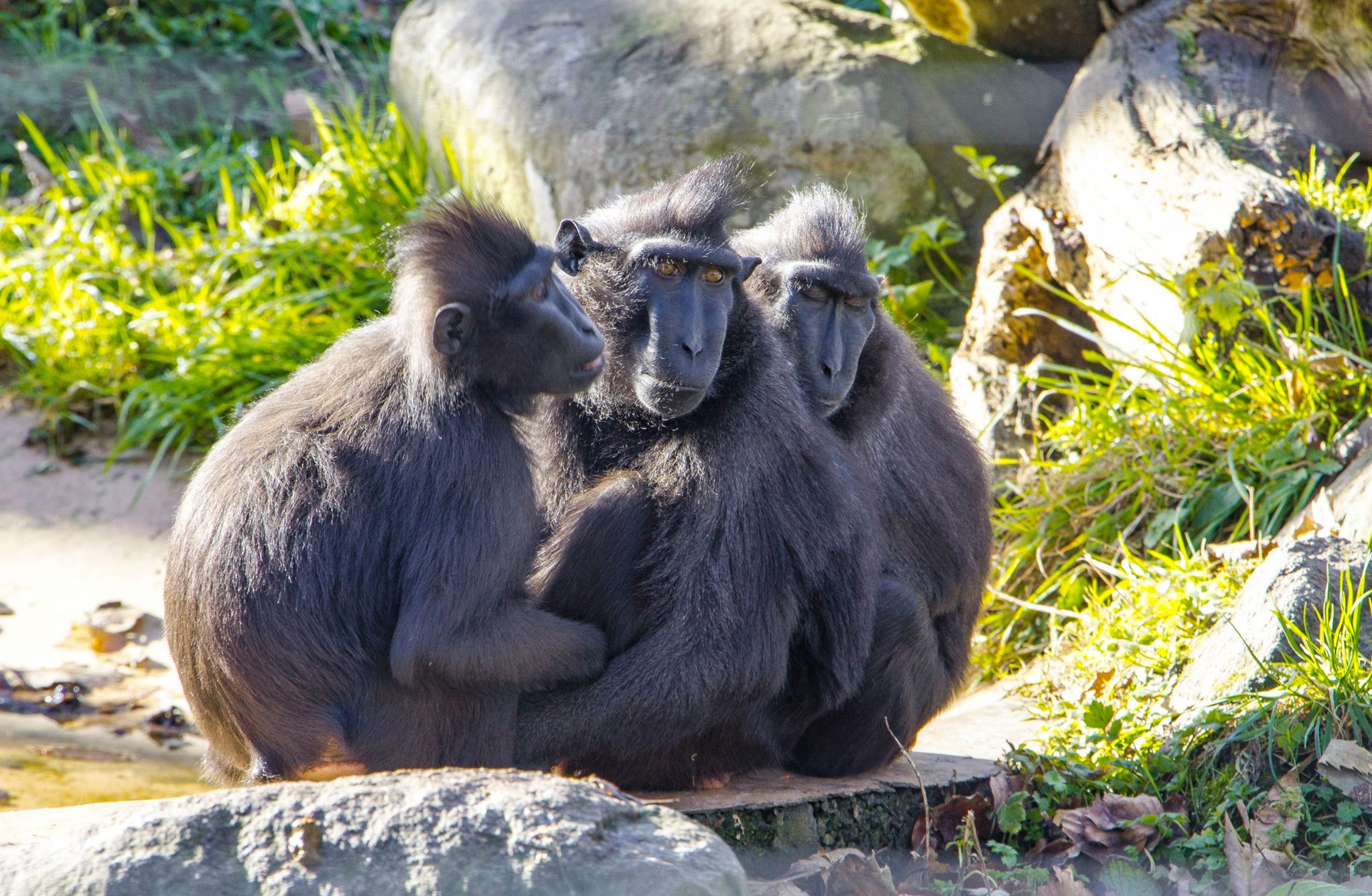 Jersey Zoo is home to a colony of Sulawesi crested black macaques. These punk hair monkeys are critically endangered in their home island in Indonesia where they are hunted for their meat and kept as pets. Illegal logging of their tropical forest habitat for agriculture has also contributed to a 90% population loss in the last 30 years.

Fun fact– In 2011, Naruto, then  a 7 years old macaque , snapped several ‘selfie’ photos of himself with a camera belonging to photographer David John Slater, who was on assignment in Indonesia. This became the focus of a famous lawsuit over whether or not the photographer or the monkey ‘owned’ the copyright of the photo. 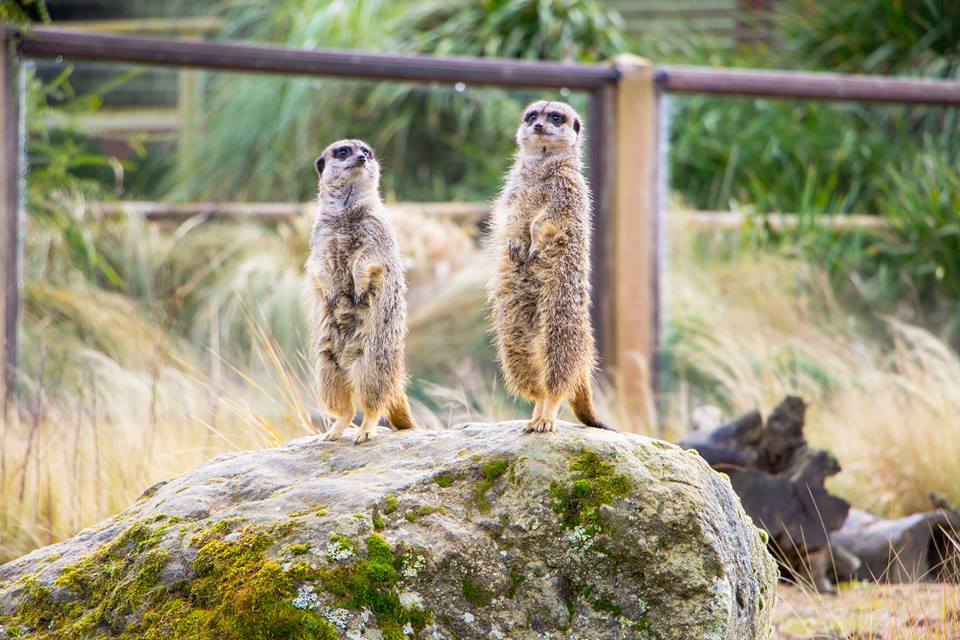 The slender-tailed meerkats at Jersey Zoo are a type of mongoose found only at the southern tip of Africa in the Kalahari and Namib deserts, Angola and South Africa.They live in groups with females dominant, a ‘sentry’ will keep lookout whilst the rest of the group feeds. If predators are spotted the alarm cry will be different depending if it is a land or air predator.

Fun fact– Meerkats eat mainly insects, termites are their preferred insect to eat. However, as they are immune to the venom of scorpions and snakes they will bite the venomous tail off a scorpion and clean the remaining poison out by rubbing it on the ground before eating it. 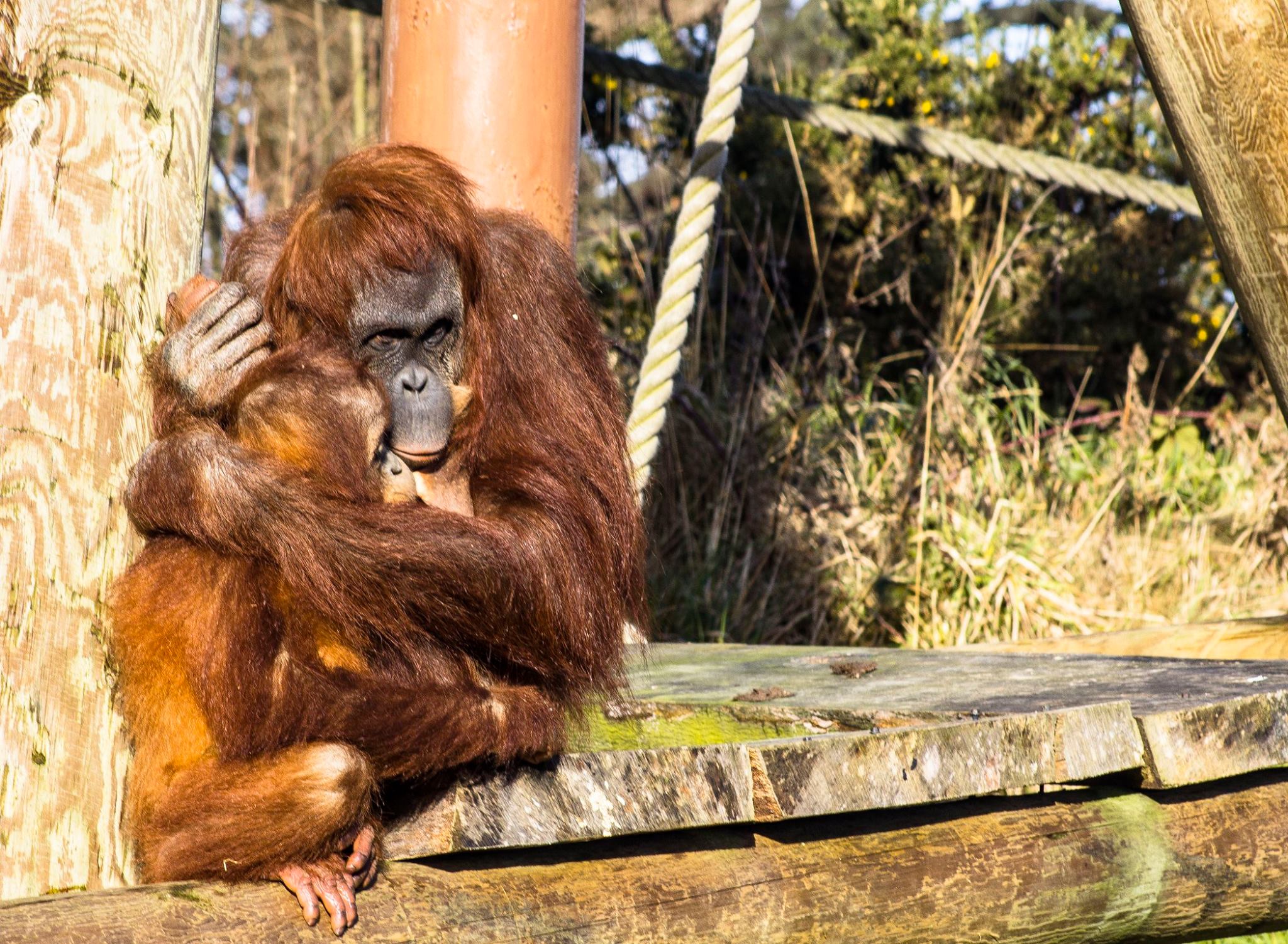 The Sumatran orangutan is the most threatened of the six great ape species. In Malay, orangutan translates as person of the forest and these arboreal mammals are the largest tree dwelling animal on earth. Males rarely walk on the ground and females almost never leave the trees. The orangutan is one of our closest relatives – in fact, we share almost 97% of the same DNA.

Fun fact– King Louie, the orangutan in Disney’s ‘The Jungle Book’, was voiced by the hugely popular American jazz/ swing singer Louis Prima who considered playing King Louie as one of the highlights of his career and felt he had become “immortal” thanks to the movie.